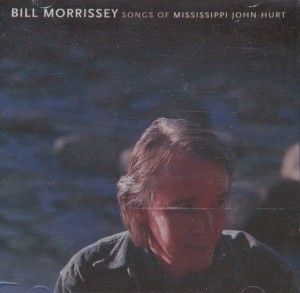 Bill Morrissey, who passed away in 2011 at the age of 59, recorded these songs by Mississippi John Hurt with the stated intention not to record them note for note, as ‘I didn’t see the point’. And of course Mississippi John Hurt has done this better than anybody else ever could, so inimitable and singular is his totally relaxed and fluid, yet swinging guitar playing and equally laid-back singing style. This can never be heard better than on his exceedingly brilliant 3-CD compilation The Complete Studio Recordings, which I am fortunate enough to own and which has given me hours of unadulterated joy since I bought it. So the arrangements on here are somewhat embellished in comparison, although Morrissey’s guitar playing is naturally influenced a great deal by Hurt’s style and his vocals are well-suited to these songs. I have to confess that it took me a bit of getting used to the, for me and my expectations, unusual arrangements. As you may have guessed already by judging the posts on my blog, I like my music rather stripped down and kept simple. Avalon Blues for example featuring a rolling piano and a saxophone (which isn’t my favorite instruments in general) – but it works very well I have to say after getting used to it. Likewise, Louis Collins and I’m Satisfied are adorned by trumpets which I am especially fond of on the former song. The decidedly old-school sounding Funky Butt, Joe Turner Blues and Hey, Honey, Right Away are not merely fabulous songs but arranged on here exactly to my liking so are natural favorites on Songs Of Mississippi Hurt for me. An album holding high the flag for old-style Folk Blues (although there are other influences evident on various tracks), and I can’t think of many people who could have interpreted this batch of classic Mississippi John Hurt songs as convincing as Bill Morrissey.