I can’t remember where exactly I took this, but it was somewhere on the way from Drumheller to Calgary, Northeast of Calgary, Alberta.

The two grain elevators were built in 1906 and 1929 respectively (I’m assuming the green one is the one built in 1929). As I went there in March the park wasn’t open so I had to make do with having a look and photographing them from outside of the park and including the ugly fence in the first photo.

I love how even the historical marker is installed upside down.

For the whole set of photos from Mono Lake, visit my photostream on Flickr at: 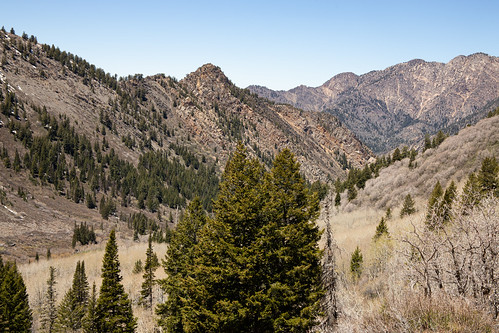 This post isn’t meant to be an academic study of the American Bison or anything in that area, I am posting this purely because seeing them has been such an impressive experience for me. Having read about them and the sad story of their near-demise in the 19th Century quite a bit recently I have become increasingly fascinated by them and when the time came to plan my recent holiday in the Canadian province of Alberta I was more than delighted to learn that they can be found in a couple of places throughout the province. First and one of the best addresses (as far as I am aware) being Elk Island National Park, located less than an hour east of the provincial capital of Edmonton (which was my first stop). So I didn’t hesitate (I even joked with my friends that I wouldn’t return from my trip before I managed to have seen at least one), to drive over to this delightful, 184 km² big National Park with its captivating mix of aspen parkland and boreal forests after my arrival. Fortunately I didn’t have to search too long to spot some, although I didn’t encounter large herds of them (apparently there are over 300 living in Elk Island National Park) so here are some photos I took, being thoroughly impressed, as well as a bit intimidated by their size and statue, although they apparently are rather peaceful fellows from all I heard. Wandering around one of the park’s biggest lakes, Astotin Lake, I felt a bit uncomfortable to be honest, as there was faeces lying around in a number of places, which given its size could only have come from them and I didn’t exactly know what other types of wildlife are living in the park (I am a bit of a coward) It being March, I had the park pretty much to myself and it was snow-covered and the lake iced-over – which apart from me being a bit worried, was a wonderful experience and probably my closest encounter was wilderness so far (and I love snow).

Another encounter with them took place at Rocky Mountain House National Historic Site where they were fenced in somewhat but that site otherwise being equally fascinating and rather eerily quiet and forlorn at this time of year. I imagine there are a lot more people there in summer, but there were none apart from myself on my visit.

Keokuk, Iowa is a city of about 10000 people in Southeastern Iowa. It is named after the Sauk chief Keokuk, who is commemorated with a statue and thought to be buried in the Rand Park on the edge of the Mississippi River.

There is a fine display of historic architecture in Keokuk’s downtown area, although quite a lot of buildings have seen better days and were seemingly no longer occupied especially the shops on the ground floor.

Mark Twain’s brother Orion was a long-time resident of Keokuk and Twain wrote about Keokuk in his Life On The Mississippi book, which is one of my favorite books of his.