I made this slide show to one of my (many) favorite Uncle Tupelo songs (from Still Feel Gone) a few years back. It’s not prefect by any means but I wanted to capture the feeling of living in small towns (in Texas in this case) and ‘looking for a way out’. Whether or not that is always the right way forward or not I am not too sure about, but I guess a lot of people can relate to that urge, I certainly can or rather could when I was younger.

The Second part of my annual music roundup.

Jack White : Did You Hear John Hurt? (from Another Day, Another Time)

The Avett Brothers : That’s How I Got To Memphis (from Another Day, Another Time)

Eric Bibb : Sittin’ In A Hotel Room (from Deeper In The Well)

Joan Shelley : No More Shelter (from Over And Even)

Donovan : Epistle To Derroll (from A Gift From A Flower To A Garden)

Dar Williams : If I Wrote You (from Many Great Companions)

Bill Morrissey & Greg Brown : Fishing With Bill (from Friend Of Mine)

The Cowboy Junkies : Misguided Angel (from The Trinity Sessions)

Today’s video is a bit more traditional than the stuff usually covered on here but I just love it. I heard this song first on Son Volt’s A Retrospective  : 1995 -2000 and it quickly became a favorite of mine. I love the ‘Naaaashville’ in this version. (Apparently you can’t embed this – so you have to follow the link onto YouTube – well worth the extra click)

Son Volt and me go back a long time. I have been listening to their records since their first album Trace came out back in 1995. But I have to admit that I stopped listening to their new records after Wide Swing Tremolo. The excellent compilation

A Retrospective 1995 – 2000 rekindled my love for their music when it was released in 2005, but I didn’t buy their next records Okemah And The Melody Of Riot and The Search. The first new record in which Jay Farrar was involved with after that time I bought was his collaboration with Death Cab For Cutie’s Benjamin Gibbard on the Jack Kerouac-themed One Fast Move Or I’m Gone, (which is a fantastic record and which I will be writing about on here at some point in the future). I meant to buy the 2009 album Central American Dust, but didn’t manage to do so far, so that is still on my to-buy list.

After hearing only good things about Honky Tonk I bought it – and I don’t regret doing so. The first question coming to mind is: Is this still Alt.Country? As the title implies, it is leaning pretty far towards old-school Country more than the contemporary Alternative Country style Jay Farrar helped to create and define with Uncle Tupelo and Son Volt over the past 20 years or so.

There’s even a song on here called Bakersfield which sounds exactly as you would expect, it’s the most Country-Rocking song on the album and probably wouldn’t sound at all out of place in a Honky-Tonk bar in, well, Bakersfield. Even the lyrics such as ‘… there’s more brick walls than bridges on the way to your heart…’ could probably be found on songs played on mainstream Country radio stations – a far cry from the lyrics of early Uncle Tupelo recordings such as Still Feel Gone or March 16-20, 1992. Gone are the occasional harder rocking songs found on the early Son Volt albums (such as Route from Trace or Straightface from Wide Swing Tremolo). Mark Spencer’s pedal steel guitar is all over the place on the album and the songs are mainly slow to mid-tempo (and quite short, some of them are barely over 2 minutes long), but I like the slowed down ones best, which make the pedal steel guitar sounds exactly as I like it – I always loved their sound, not so much because they are a staple in Country music, but for their otherworldly, dreamy sound characteristic. Especially good are Angel of the Blues and Down The Highway which both fall into this category. In addition, Angel Of the Blues is probably one of the best songs he’s ever written, although the arrangement does play a big part in making the song as good as it is – the pedal steel guitar is the most prominent instrument you hear, the song very slowed-down, full of melancholic longing, a heavenly, if dusty, ode to the American heartland of which the band clearly is a child. Wild Side and Livin’ On (the latter featuring a lovely Accordion) are both other fine examples of Farrar’s knack for writing slow, dreamy songs immediately driving a hook in your heart (mine at least), such as Too Early or Tear Stained Eye (both from Trace), always the reason I loved Son Volt records so much.

The fiddle on Down The Highway actually sounds more Celtic than American (which is of course not all that surprising), contributing to making the song another highlight of the album for me, the eternal hope of finding better things (love in this case), somewhere far away – down the highway. The super-catchyTears of Change, Seawall with its dueling fiddle and pedal steel guitar providing the instrumental flourishes, and Barricades with a number of changes in speed are more of the good stuff, but it is album closer Shine On with some unusual sound effects and slightly dragging drums, providing a bit of sonic variety, perhaps lacking on most other tracks of Honky Tonk. So I am holding my breath how the next Son Volt album will sound. 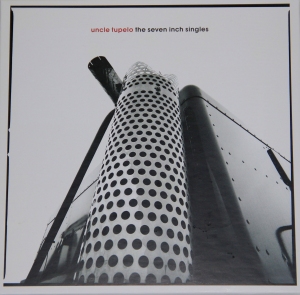 For those of you that don’t know this, it features the following 7” singles released between 1990 and 1992

and That Year b/w Pickle River, that 7” was never released before in this form (That Year is from a 1988 demo called Live And Otherwise  and Pickle River from another self released demo called Colorblind & Rhymeless)