The Bone Creek Museum of Agrarian Art was established back in 2008 in Regionalist painter Dale Nichols’ hometown David City, Nebraska. It’s fair to say that David City isn’t one of the US’s best established tourist destinations, but driving there you get a very good idea what must have inspired both Dale Nichols and the people who founded The Bone Creek museum.

I first became aware of the museum after purchasing the book published by Bone Creek called Dale Nichols Transcending Regionalism on a visit to the Cedar Rapids Museum Of Art back in March. I hadn’t been aware of Dale Nichols work either until I browsed the CRMA museum shop, but was immediately drawn to his work by the front cover of a winter scene with one of his trademark red barns (see the cover shot below). I plan to write a review of the book for this blog in the future, but at this stage I just want to say that I quickly became intrigued by his beautiful work and his interesting life story, and the book is a very fine piece of work by itself which I am happy to call my own. 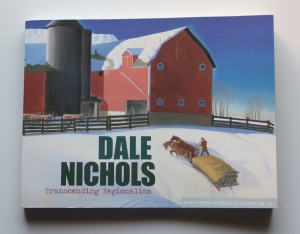 Consequently, it didn’t take long for me when planning my next trip, to decide that I would be making a stop in David City and visit the museum. I was greeted very warmly by the woman at reception and her companion who was, luckily for me, very knowledgable about all things Dale Nichols and even went so far as to go down into the basement and get three of his paintings that weren’t actually hanging in the gallery. They only had one other of his works hanging there, but it was fantastic to see a few of them at last after studying the book repeatedly.

At the time I went  (September 2013) they were showing two very interesting exhibitions, one called Inspirations From The Black Hills showing works by artists that live in this region of South Dakota, most of the work on show was very good too. Also extremely exciting were various works in the show concurrently running called Highlights From The First Five Years. The most memorable work in that exhibition for me was one by Missouri artist John Roush depicting a country road bathed in sunshine in winter with deep snow on the road and the surrounding fields, I immediately fell in love with the painting. He mainly paints with pastel and had an exhibition at Bone Creek back in 2009/2010, I will definitely by checking out his work more thoroughly in the near future.

It’s a small, but apparently very active museum, lovingly refurbished and deserves to get all the support it can, it’s definitely what the art scene in a small-ish town needs. Their web address is www.bonecreek.org , but better still, head out there yourself any pay them a visit. Besides, naturally, the only proper way to experience a piece of art is the first hand experience, the brush strokes, the contours of the paint are simply impossible to reproduce in a book or on a poster. The address is 575 E Street, David City, NE 68632. David City lies about 65 miles west of Omaha, and as I wrote at the beginning, the countryside on the drive there is beautiful.

The following photo shows the studio built by Dale’s brother Floyd, also an accomplished artist and craftsman. I know little of him as he never got the sort of attention his brother had, but apparently he mainly worked with sculptures. However, the Bone Creek Museum had one of his paintings hanging in their gallery which was very good indeed. I can’t really say how the studio is used nowadays.

To finish this post, here are a few photos I took in and around David City on my visit. 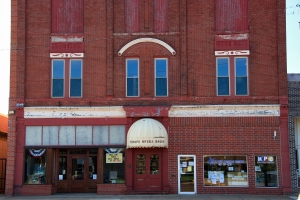 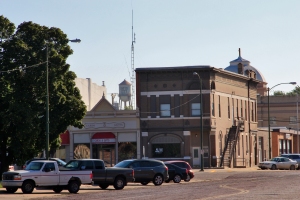 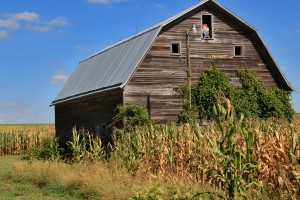